When I decided to start my 3.5 month Asia trip in Myanmar, I wasn’t sure what to expect. Myanmar was a country I knew very little about, and it wasn’t until talking to a friend from home who had recently been that I got a vague sense of what I might see or do there. Big thanks to Marshall for helping me figure out where to go, what not to miss, and providing his travel guide for my use so I could have a solid grounding to begin my trip.

Myanmar is very different than any other Asian country I’ve been to (previously Indonesia (Bali only), Malaysia, Singapore, Vietnam, Cambodia, and now writing this from Thailand). It has none of the built up tourist infrastructure of these other destinations, and a much more genuine sense as to what the country and it’s people are truly about. In many ways this was a great thing to experience, and as many say, it won’t stay like this for long, but it did have it’s drawbacks:
– Accommodation (by backpacking standards) was very expensive. About $15-20/night for a dorm bed in a halfway decent hostel, of which, there was maybe one per key destination. Otherwise it was awful hotels that cost nearly as much, were dirty and unappealing (by western standards), and had none of the social aspect a hostel offers.
– Transportation between major destinations was pretty much all long distance buses. As opposed to places like Thailand and Vietnam where domestic flights are frequent and cheap, in Myanmar these flights, if they existed (only between 1 or 2 or the destinations) were quite expensive, infrequent, and from what I heard, unreliable. Thus, it was all long distance buses, but as mentioned above, they haven’t quite figured out how to cater to tourists, so the bus times tended to be very inconvenient. You would either waste an entire day, or take a “night bus” which would usually get you into your destination between 2-3am, which again, is not convenient bc you either waste several hours as a zombie until daylight or pay for an additional nights accommodation
– Hectic and exhausting travel. Due to the transport situation, and the fact that there are not that many major tourist destinations (and they are far apart by long distance bus), it led to a quick and hectic tour of the country. In 9 days (including the half days on either end that included travel), I took 3 overnight buses. I stayed in 1 hotel, 2 hostels, and 1 homestay. I was uncomfortable, tired, and very over the one day here, next day there schedule that most do as they speed through this country. Pretty much everyone I met along the way also experienced this hecticness.

But it wasn’t all bad! Myanmar has some spectacular things to offer the backpacking traveler (I say backpacking, because though you can certainly go there and not follow the backpacking route/standards, it is far from 5-star luxury and you won’t find any high-end travelers). So then actually I take that back, you can’t really go to Myanmar without ‘backpacking’.

My route:
Arrive in Mandalay, Myanmar’s second largest city, mid-day on Saturday, July 18th. Check into a hotel, and head out with a motorbike driver to visit a couple of pagodas in town and the Mandalay Hill. Mandalay Hill was an interesting ~45 min uphill stair hike through a long marketplace/multiple pagoda terraces until reaching the final pagoda at the top and seeing a nice view over the city of Mandalay. You have to take off your shoes out of respect in all pagodas/holy places, and so this trek was barefoot (something I had to get used to all over Myanmar… walking barefoot on dirty ground because it was ‘holy’).

At the top of Mandalay hill I met a cool Aussie named Rob, and after exchanging itineraries we realized we’d be doing the same things in the same time period and so we made a plan to meet up in the next destination, Bagan, in 2 days time (we had separate plans for the following day). This was great because I’d made my first travel friend and had a companion for at least a few days along the way.

This was also the first place I encountered a lot of Monks. They are EVERYWHERE in Myanmar and love to chat up tourists to practice their English. 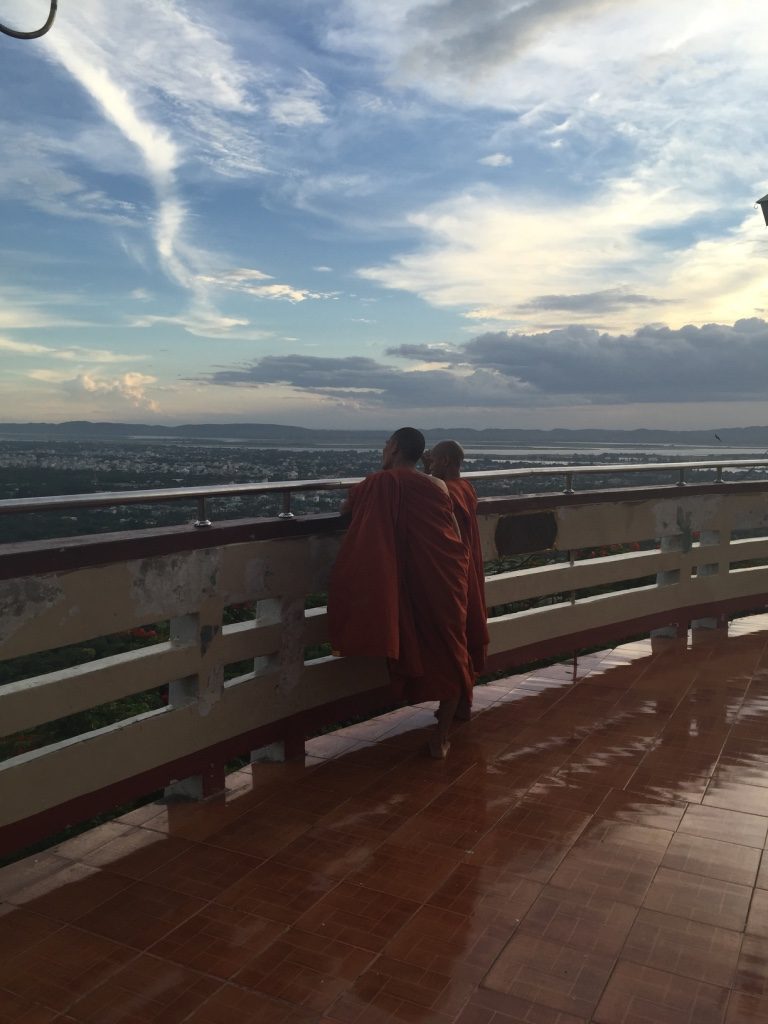 Monks at Sunset on top of Mandalay Hill
The next day I did the “3 cities tour” in the outskirts of Mandalay. This was pretty cool. I had my same motorbike driver from the night before, and he took me around all day to several cool sites: Saiging Hill, Inwa city, and the U-Pain Teak Bridge for sunset. While accommodation is expensive in Myanmar, labor is extremely cheap. Hiring a motorbike driver for the whole day cost 15,000 Kyat, approximately ~$13. 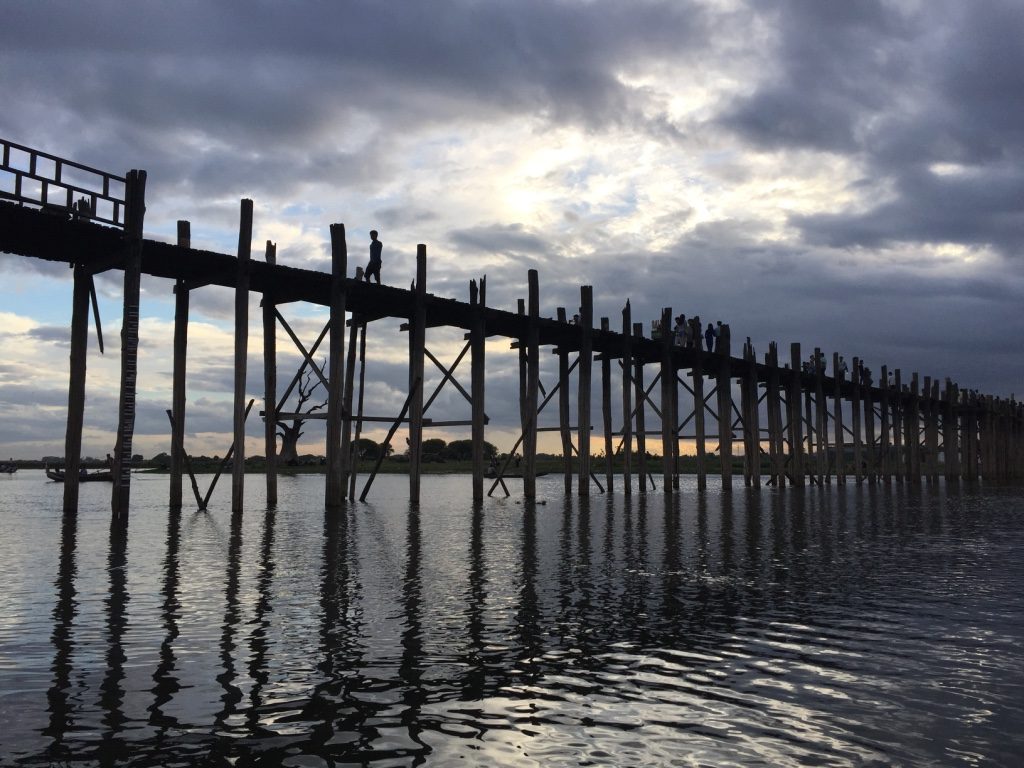 That night, I took my first “night bus” from Mandalay to Bagan. I was told this bus would take about 7 hours, and it left at 9:30pm. It actually only took 4.5 hours, and I arrived at my hostel (OstelloBello, the best place I stayed in the whole country at $20/night for a dorm bed) just before 2am. I didn’t have a reservation until the 20th since I thought I’d get into Bagan in the morning, and they didn’t have an extra bed for that night, so I ended up sleeping for ~2 hours on a bench on their patio. <— Yes, I actually did that.

Bagan is a magical place. Including the day I got in, I spent 3 days here exploring just a small sliver of the ~4500 temples and pagodas in the area by e-scooter. E-scooters are electric scooter bikes that all the tourists rent to drive around the temples – they are super easy to drive and very fun. Oh, and they cost about 5000 Kyat a day to rent, meaning it was about $4.25 to entertain myself all day long visiting temple after temple. That first morning I got up from my bench bed with the rest of the people heading out at 4:30am to catch the sunrise. It was a bit cloudy so the sunrise itself was unimpressive, but the seeing the surroundings of Bagan for the first time as the sky is getting bright sitting on the top a beautiful old pagoda was pretty cool! Met up with Rob later in the day and continued the temple site seeing over the next 2 days. Through Rob, I met Peer, and the three of us set off for the next destination, Kalaw. 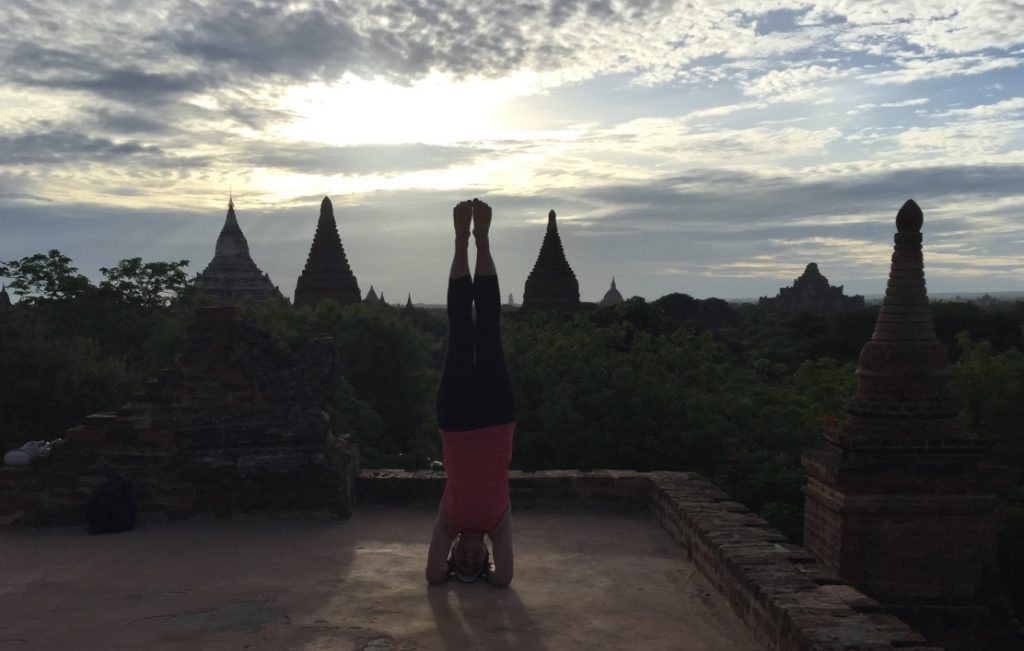 Practicing my headstand in Bagan at Sunrise

Calling Kalaw a destination is a bit misleading: it’s a starting point with nothing else but trekking offices and awful dirty guesthouses. Rob and Peer headed out on a day bus, but I stayed one more full day in Bagan and took the night bus to Kalaw which arrived just before 3am. I went to the guest house they were staying at and checked in for ~3 hours of sleep before we got up to start our trek from Kalaw to Inle Lake. Rob and Peer had met Henry and Steph on the way to Kalaw, so our trekking group grew to a pleasant group of 5.

Kalaw to Inle Lake is about 38km via the 2 day/1 night trek (you drive to a starting point about 20km from Kalaw to begin, but there is also an option for a 3 day/2 night trek that starts from the town of Kalaw). The scenery was beautiful and so green due to it being rainy season. We got lucky and didn’t get too wet while actually hiking, but during our lunch break on day 1 the skies opened up to torrential downpour. After about an hour it stopped and we ended up finishing the last 3 hours of the day to our homestay walking (or slipping & sliding) through crazy mud paths. This would have been a much different trek in the dry season. 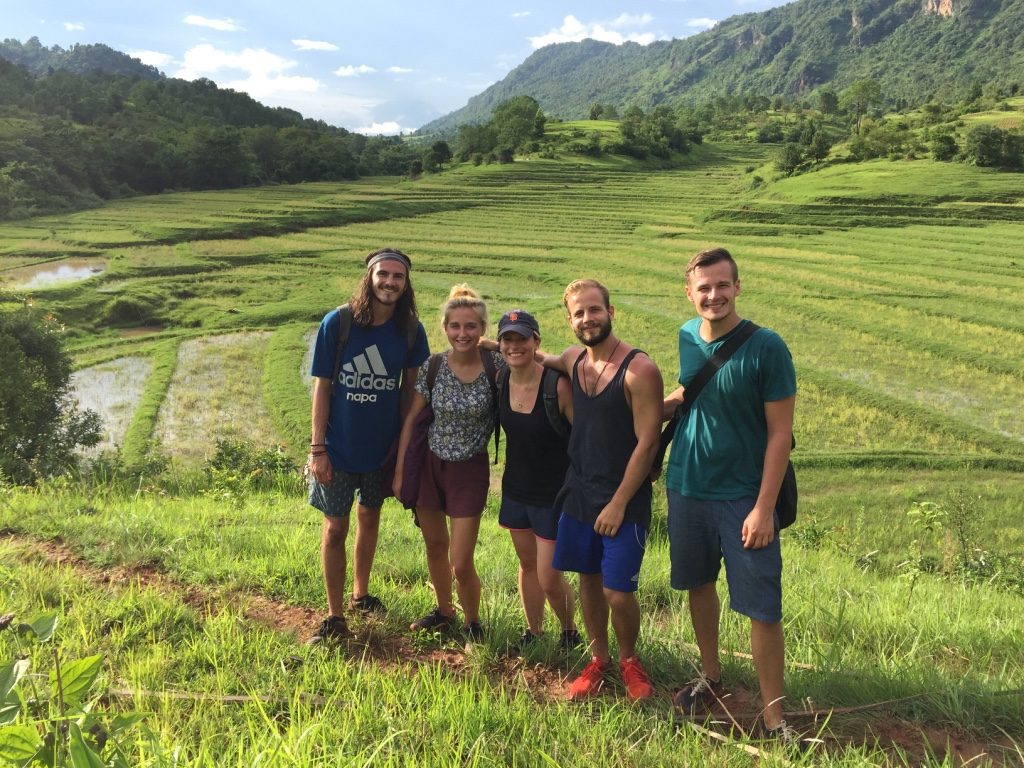 After an early start on day 2, we arrive to Inle Lake around noon. We have lunch there, and are getting ready to head to our boat transport/lake tour when it starts pouring rain again. We wait it out for a bit hoping it will pass, and it looks like it will, and then not 2 min after we get in the boat and head out it starts to pour. We got soaked on the boat heading our to explore the lake, and it was quite a site to see the 5 of us huddled under our provided umbrellas in the tiny boat. It rained on and off for the ~3 hour boat ride/tour across the lake to Nyuang Shwe, the big lake town where all the tourists stay. Along the way we stopped at a Silk & Lotus flower weaving shop, a silver shop, a Burmese cigar shop, and passed by the floating gardens. We saw only a couple of the famed fisherman, and unfortunately they weren’t doing cool poses for us (this is a huge photo opp and highlight of the lake tour in the high season). On the other side, cold and wet, we made our way to our accommodation. I chose to stay at the only hostel in town, but the others grabbed a couple of cheaper double rooms at a hotel in the city center. After a shower we met up again to stroll the small city streets and grab some food. 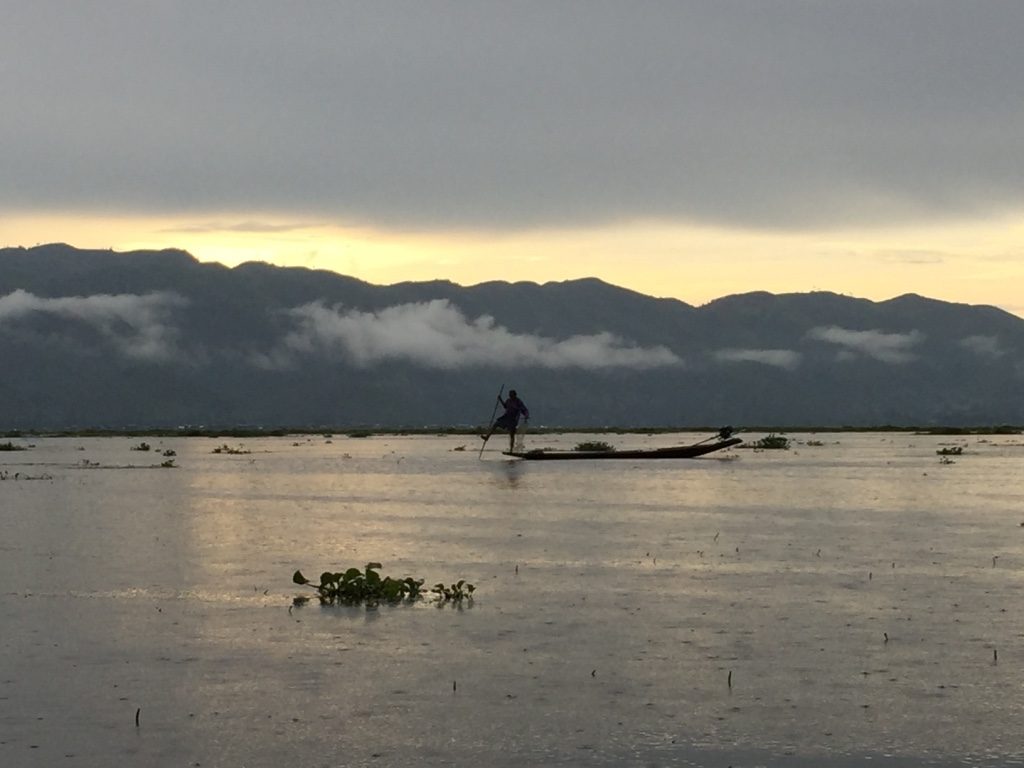 The Inle Lake Fisherman at Sunset

The next day I headed out to the winery on the hill with Sarah, an awesome American girl I’d met in Bagan who was also staying at the same hostel in Inle. Per everyone’s remarks, the wine was shit but the view was spectacular. We also grabbed a massage and some delicious vegetarian Dim Sum and then I was off again on another night bus to Yangon. This one left at 6:30pm (picked me up from the hostel at 5:30pm) and arrived in Yangon around 6:30am, a true night bus/long distance bus and by far the most comfortable of the buses I’d taken in Myanmar. Thanks JJ Transport. 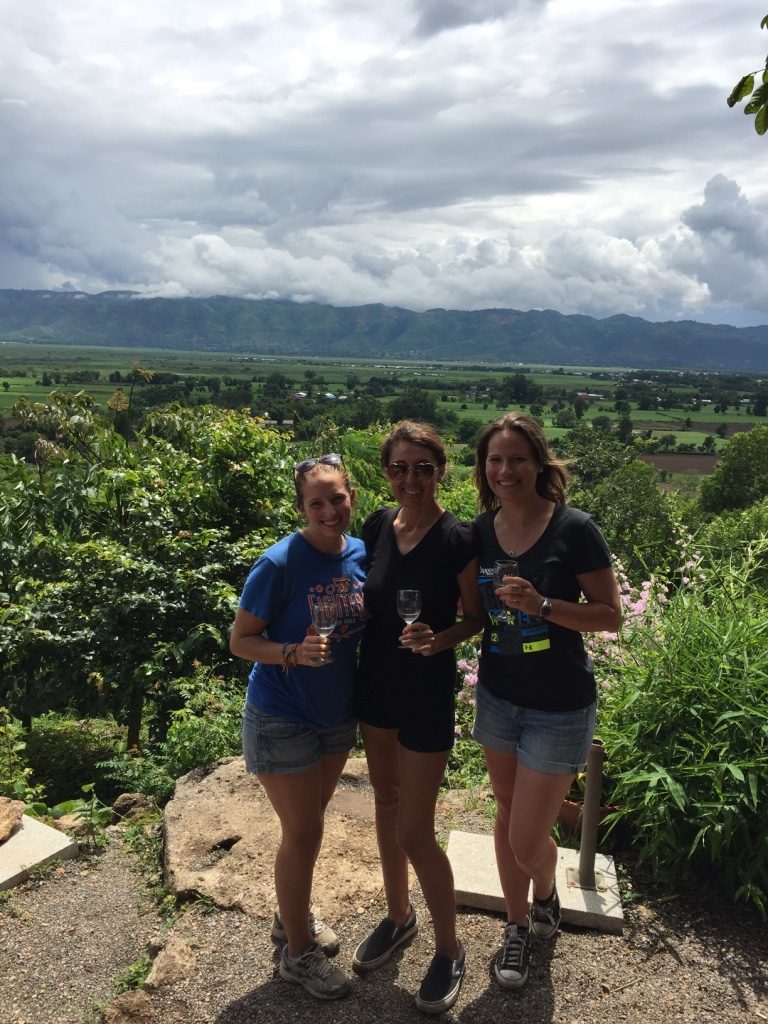 Three California ladies wine tasting in Myanmar (R to L: Sarah, Mara, me)
Somehow, my time in Myanmar flew by and I arrived in Yangon on the morning of Sunday, July 26th. I had approximately 5 hours from arriving at the bus station to travel the ~45 min to downtown, find a nice hostel that would store my bags, quickly run around to the key sites, including the largest/holiest temple in Myanmar, Shew Degon, and then get back to the airport to fly to Chiang Mai, Thailand. Somehow I accomplished this whirlwind tour of Yangon, and though I missed out on the street food and night culture of Myanmar’s largest city, I felt like I saw enough and was ready to move on to Thailand where I wouldn’t be so rushed. 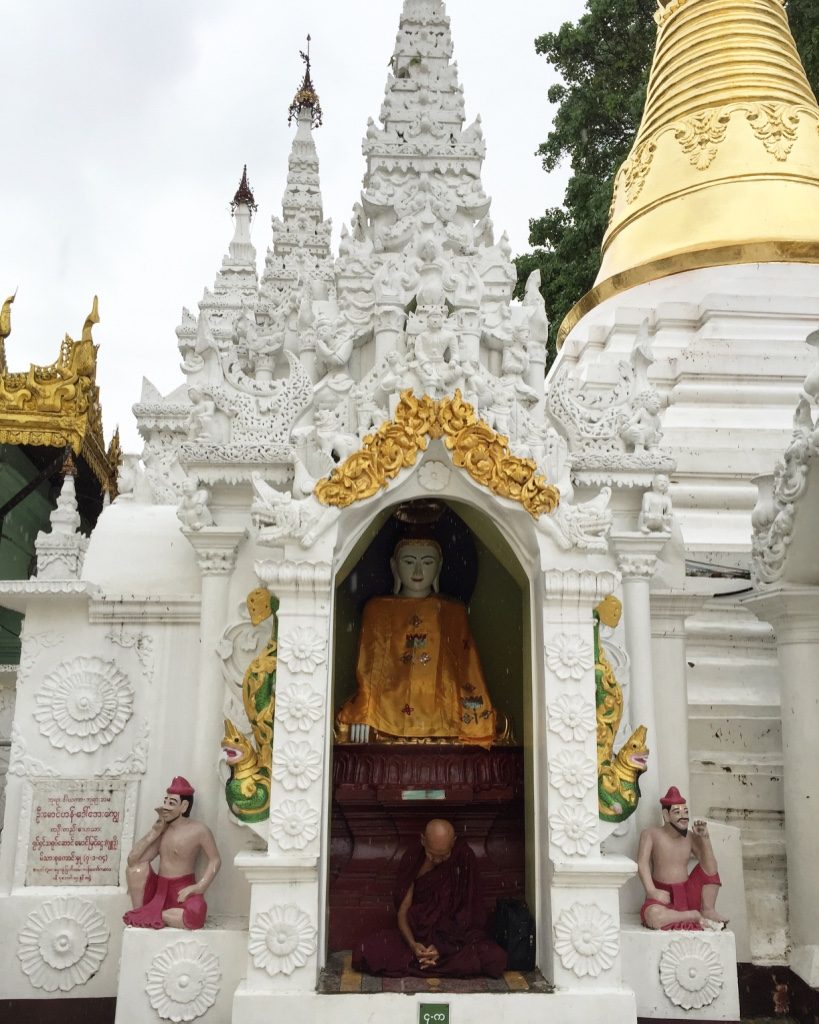 All in all, Myanmar was a great country to visit, and I have a ton of respect for it and it’s people. Being in a place, a whole country, that was ‘off the beaten path’ for tourists was an interesting, and at times, uncomfortable experience, but I’m glad I was able to go and see Myanmar while it’s still early in it’s tourist days.

Lowlights:
Transportation
Lack of good accommodation and tourist infrastructure
Hectic schedule
Trekking through crazy mud
Bathing with a bucket bath at the homestay (but hey, it was an experience!)