So far I’ve been pretty awful at blogging as I go along on my travels. It’s been several weeks (well, several since I started writing this post, several more since finishing) since I spent 2 weeks exploring Thailand, though I was just back in Bangkok a few weeks ago for a couple of days of work, so here goes my best recollections of those wonderful 2 weeks exploring northern Thailand and the Andaman coast.

I flew from Yangon, Myanmar, to Chiang Mai, Thailand, where I thought I was going to settle in for ~4 days before heading to Pai for another 2 days, but things didn’t work out quite as intended, so I spent just one day in Chiang Mai to start. I arrived in Chiang Mai on a Sunday, and was lucky to be able to experience the Sunday night market my first night there.

Oh my the street food at the market! Appropriately, my first meal in Thailand was street food Pad Thai, and it was delicious! I went to the street market with a group from the hostel I was staying at, and we had a cool little tour from one of the hostel workers as to what there was food-wise at the night market (a necessity when there were so many new and unrecognizable dishes!). I settled on Pad Thai, so gooey-fried vegetable rice ball things, a water, and for desert, mango sticky rice. Add on to that a 30 min foot massage from little popup massage places along the night market, and the evening cost me a whopping ~$6 USD. I LOVE CHIANG MAI! 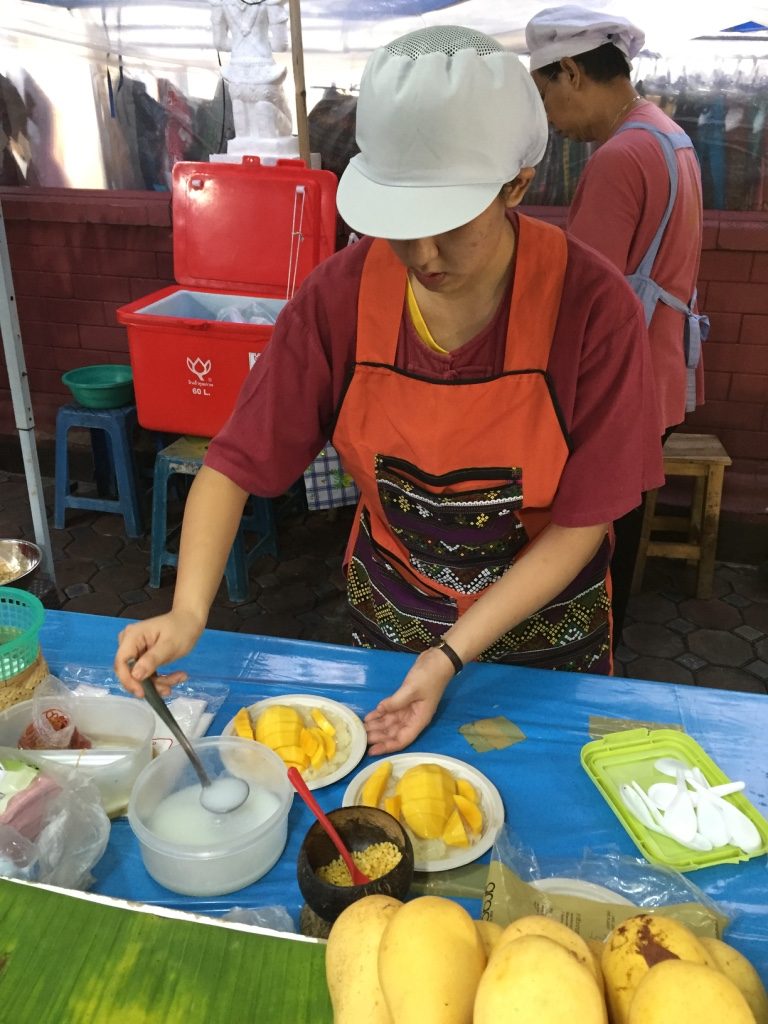 Yummm, Mango Sticky Rice
The next morning I signed up for a half-day cooking class in Chiang Mai. This was by far one of the highlights of Thailand for me. We learned how to cook 5 different style of dishes: Stir Fry (I chose to cook Pad See Ew though everyone else in my cooking group cooked Pad Thai), Vegetarian spring rolls, Soup (I chose Tom Yum Soup), Curry Paste, and Curry (I chose green curry). They made it easy to follow very clear step by step instructions, were happy to give me vegetarian substitutions, and helped us plate things beautifully. We even got a cookbook with all the recipes, including vegetarian substitutions, to take home. Check out the collage pic of everything I prepared and cooked (yes, I did all of this!): 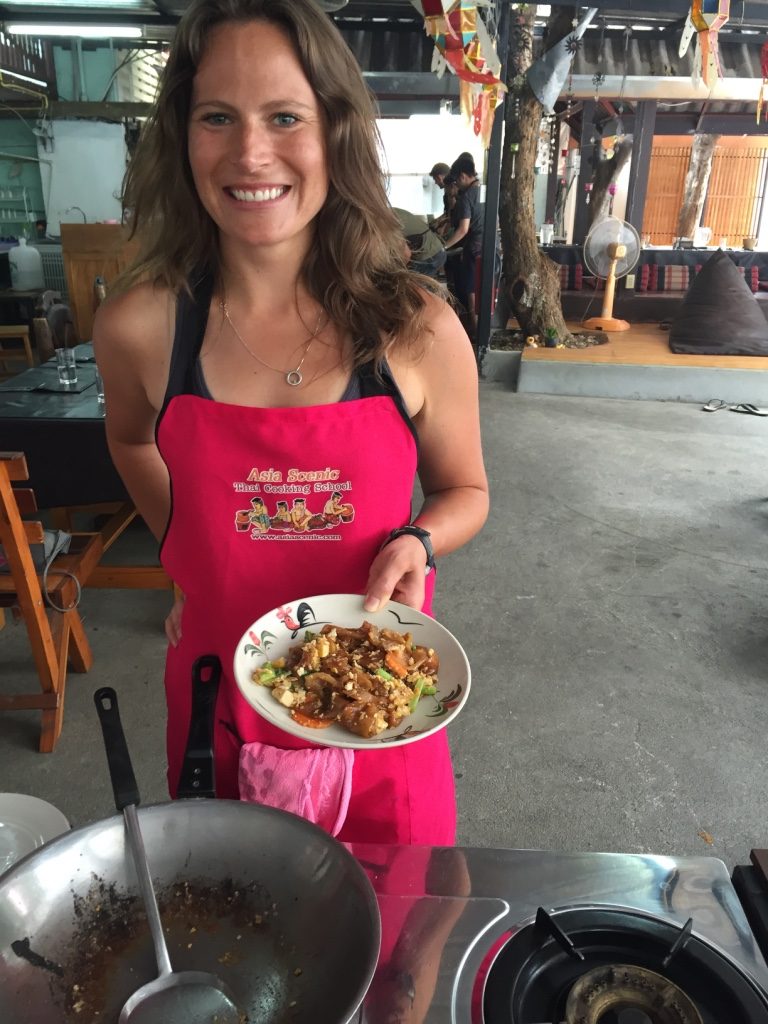 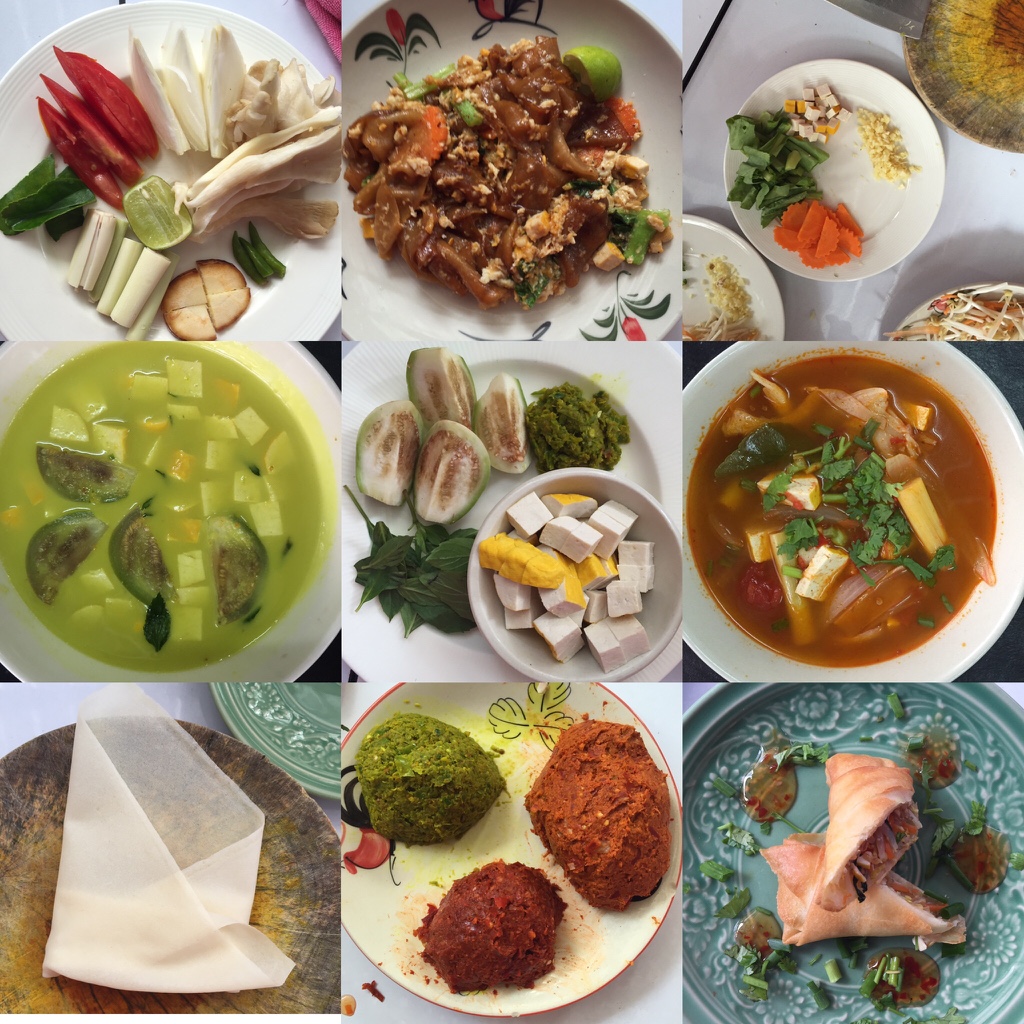 Yes, I made all of that.

After the morning cooking class, with a full belly and stocked up on dramamine for the 762 crazy turns on the drive ahead, I got on an afternoon mini-van to Pai (I was only able to get 1 night at the place in Chiang Mai so decided to go to Pai first and then finish with 3 more days in Chiang Mai rather than going through the hassle of changing hostels in Chiang Mai).

When I decided to go to Pai, it was a reluctant decision. Everyone said I should go, but no one could tell me why. What was so great about Pai I kept asking? The answer kept coming back: it’s chill. Ok… but what else? That I had to find out on my own.

The answer was simple: Pai was chill. So much more laid back, easy going, and welcoming than other areas in Thailand (even Chiang Mai, which I didn’t find to be too crazy). It was a very cute, hippy-esque little town with a reputation for a good chill out spot and beautiful nature, and it delivered on both. One of my favorite parts of this trip so far was a 2-hour each way drive along that crazy twisted road by scooter out to Lod Cave. The cave was ok, but the drive itself was the highlight – incredibly scenic, no traffic, out on the open road with the wind blowing in my hair. 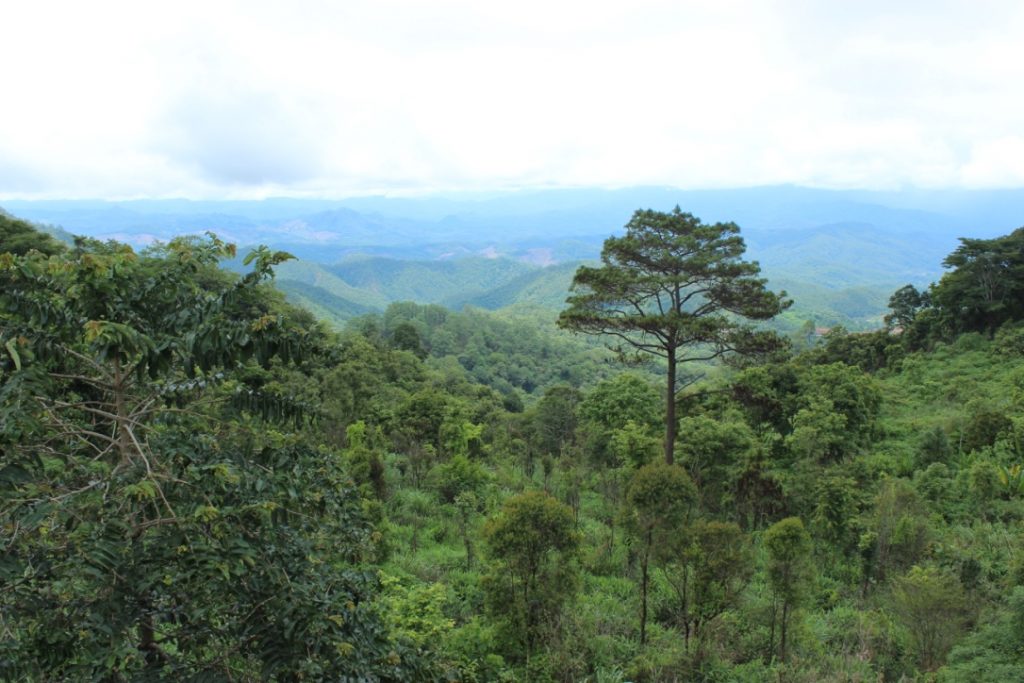 Viewpoint on the 2-hour scooter ride from Pai to Lod Cave
After two days, it was time to return to Chiang Mai. I checked back into the same hostel, and started to plan out the next few days’ adventures. First up this time around in Chiang Mai: The Elephant Jungle Sanctuary. It did not disappoint! Elephant adventures are a highlight of Northern Thailand for many, but I did some research to ensure I went to an ethical place and that there was no elephant riding. We fed, bathed, and just hung out with the elephants, and it was fantastic. 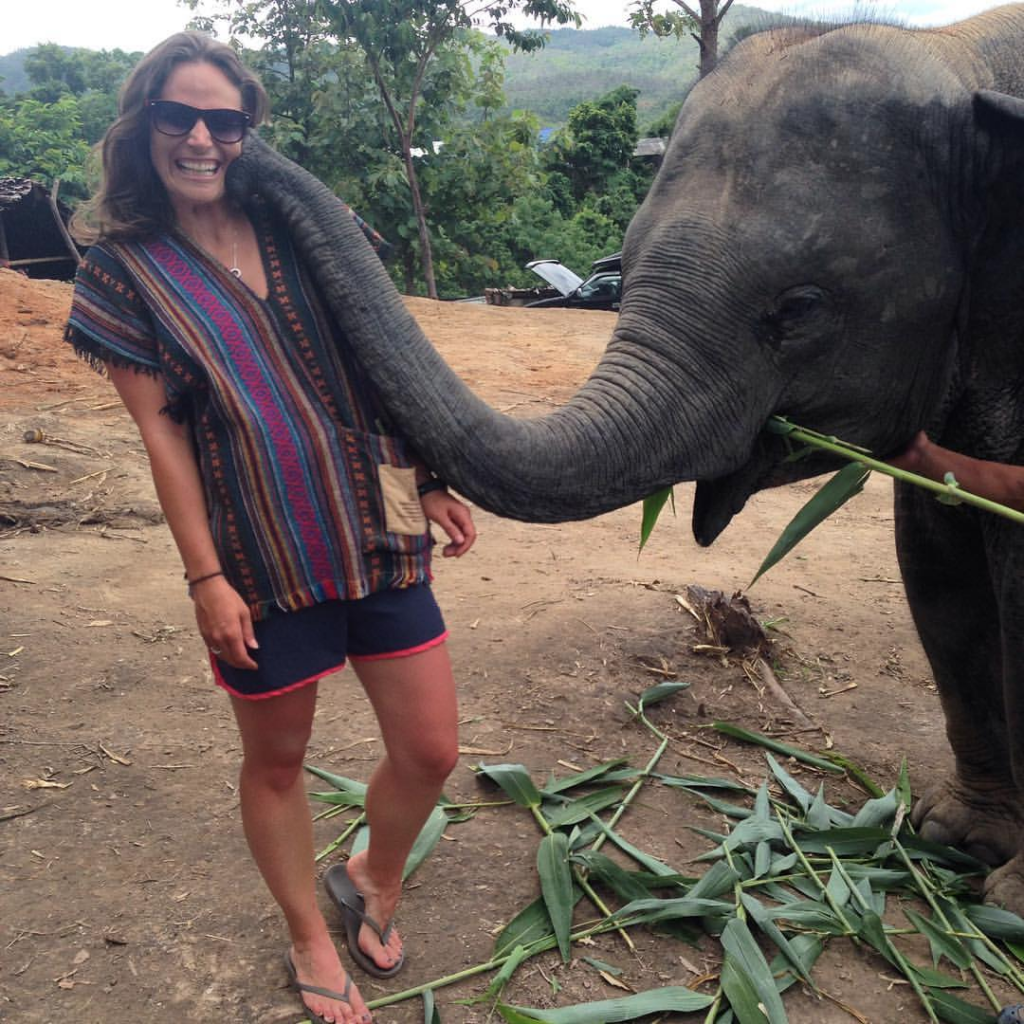 Elephant kisses <3
The next day I rented scooters again with some new friends from the hostel and we went to the Chiang Mai Grand Canyon. This was essentially and large, man made lake with areas to cliff jump and sign that said “Grand Canyon”. On my final day in Chiang Mai, I drove up the temple mountain, Dosep XXXX on the scooter and checked out the temple and the views over Chiang Mai. Mixed in with all these adventures was night markets, street food, and of course, many awesome (and so cheap!) massages. My favorite is definitely the foot massages – I have a quota of one per day when I’m in cheap Asian countries 😃 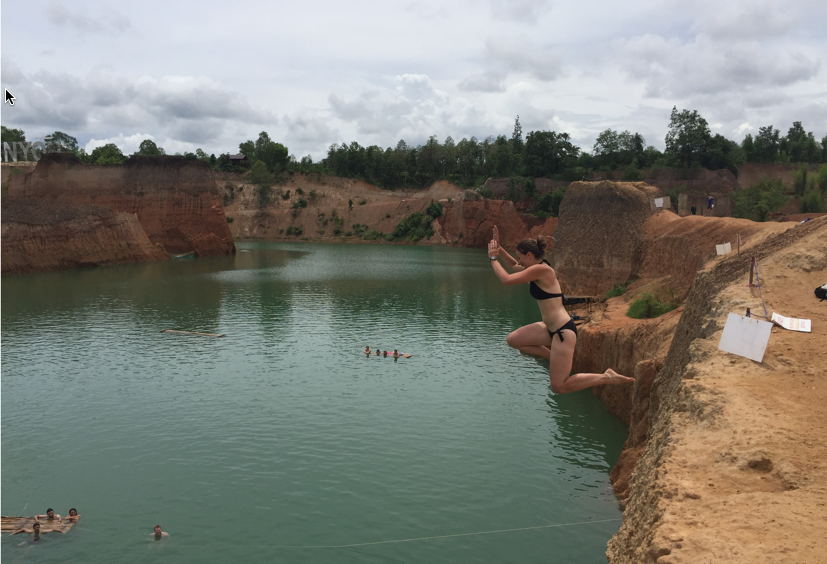 Cliff jumping at the ‘Grand Canyon’ in Chiang Mai
Northern Thailand was wonderful, but after 6 days it was time to head south to the islands. First stop, Koh Phi Phi. I planned to spend 3 days here, because the 4th of July was coming up and I wanted to be somewhere fun (and somewhere other Americans might be) to celebrate. I’m not going to say too much about Phi Phi, except that it is for sure a party island that lives and breathes on buckets of alcohol and a young party scene. Read: Not my scene. I had fun, but I didn’t stay out till the wee hours of the morning dancing on the beach every night (ok, there may have been a brief moment of beach dancing one night). I spent one day scuba diving, and then the Fourth of July was celebrated on a party boat with some Americans I’d met in Chiang Mai, and we cheered to America while playing with swimming monkeys. 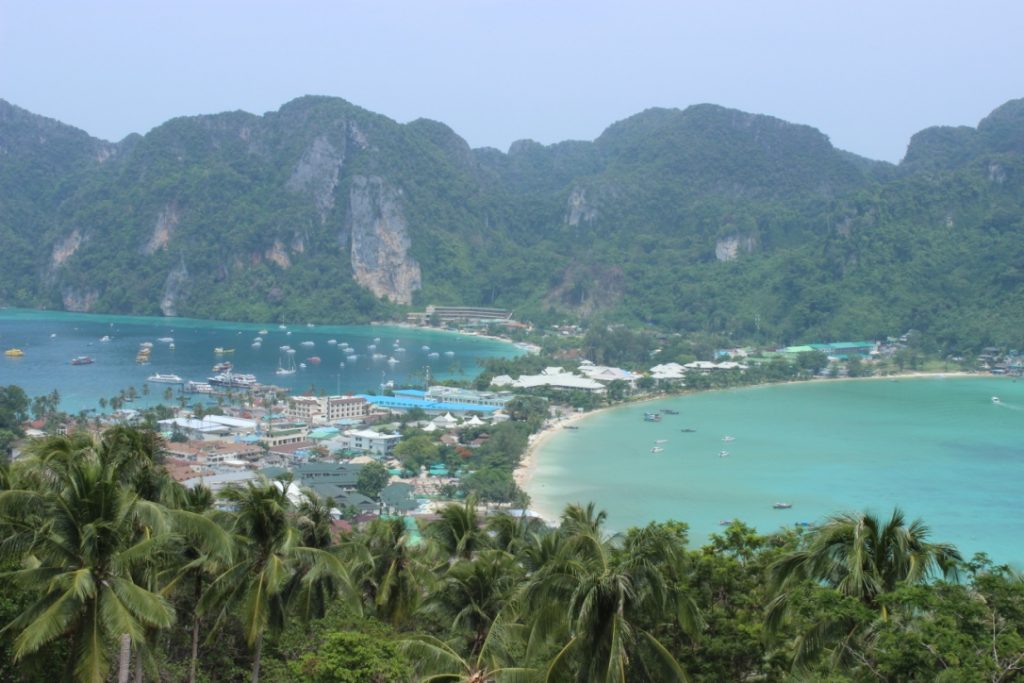 After 3 days on Phi Phi (or really, after just 1), I’d had enough, and it was thankfully time to move on to what I knew would be a highlight of Thailand: Railay.

Marshall’s family has a beach house on West Railay at Railei Beach Club, and I was fortunate enough to be able to stay in the guest wing bungalow for 3 nights. It was so beautiful, so relaxing, and a welcome change from the fast pace of the previous few weeks (and especially after Phi Phi). 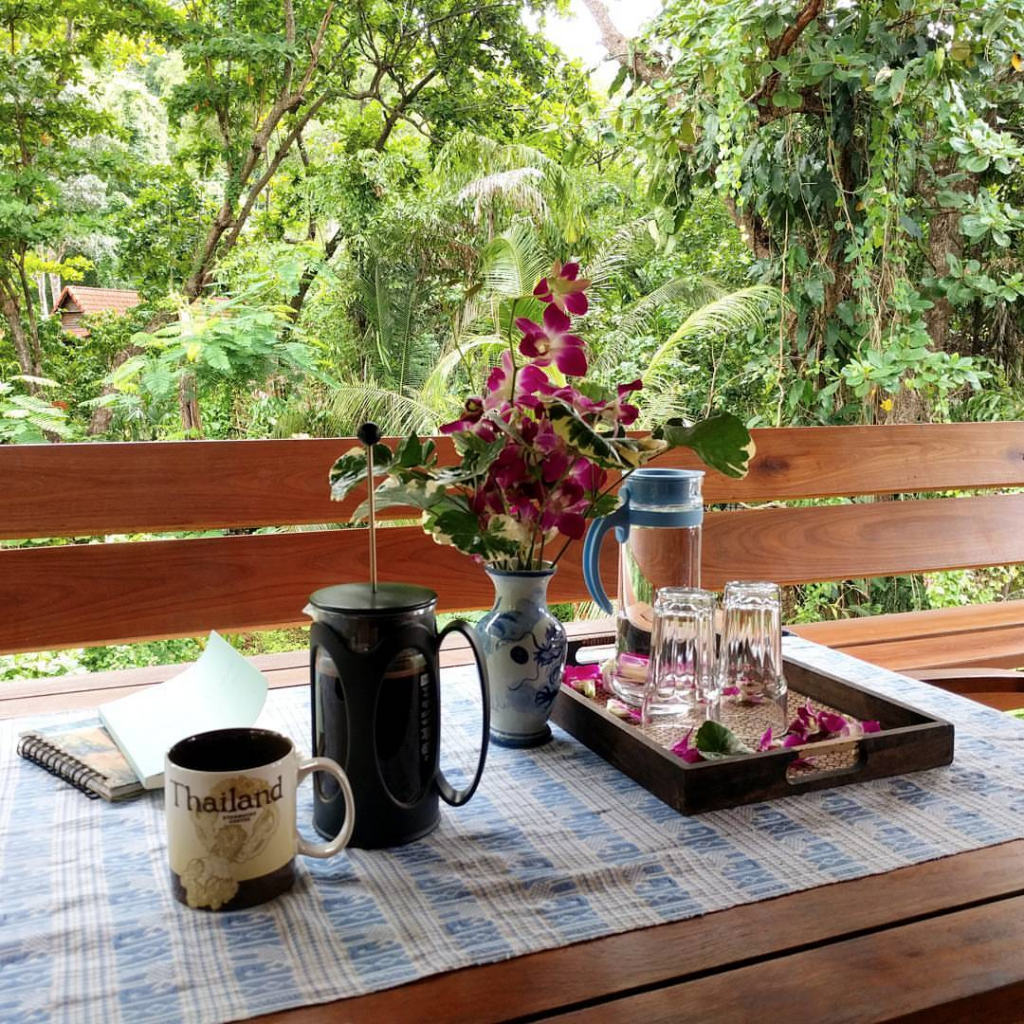 Morning View from the Guesthouse patio
Sadly, shortly after arriving in Railay, it started pouring rain (full on torrential downpour), and it barely let up for the rest of my time there. I had a whole list of things to see and do while there, but with the rain I had to cut out a few. I did get one clear morning and per Marshall’s recommendation, climbed up to the viewpoint between East and West Railay. The hike was steep and muddy, but the view was absolutely beautiful. 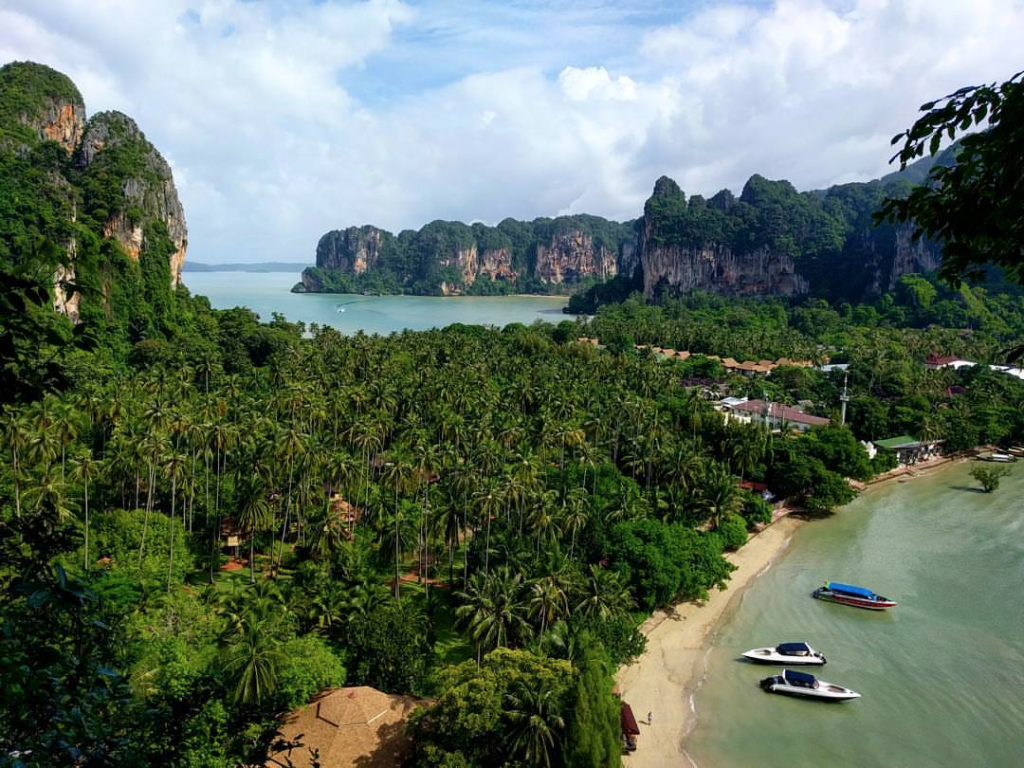 East/West Railay Viewpoint hike
Shortly after this hike, I tackled the Snoopy’s Eye cave hike. Just as I was entering the beginning of the cave it started raining again, but no worries since I was in a cave, lol. This adventure involved several wooden ladders in a pitch black cave, a headlamp, a few texts consisting of directions, failing at following these directions, and eventually making it to catch this (rainy) view: 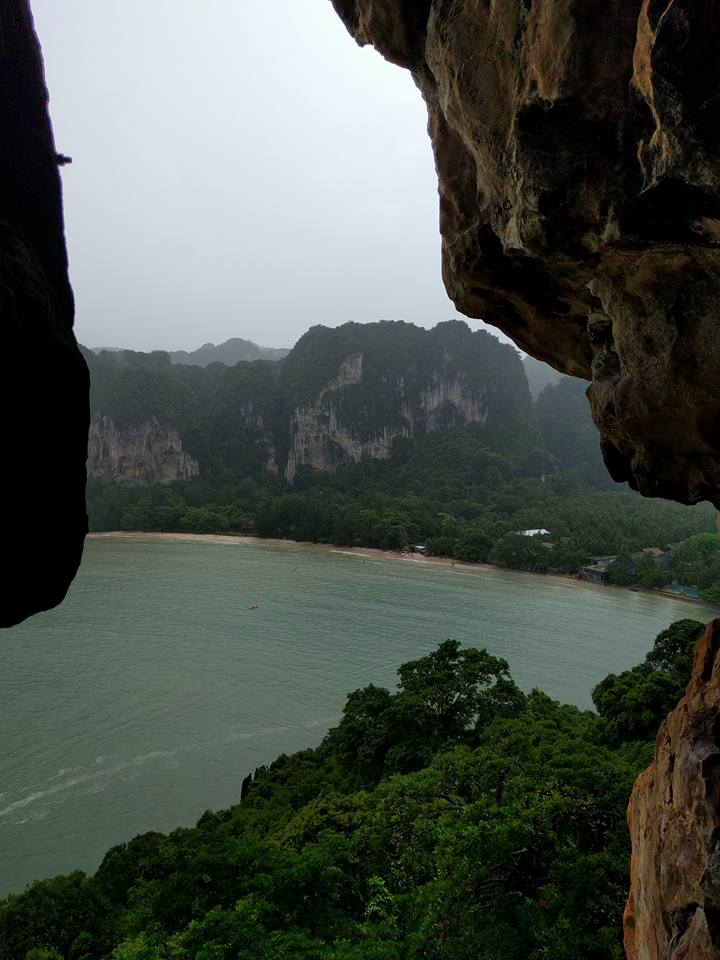 I had hoped to do some rock climbing in Railay, as this is a true highlight of the region, but unfortunately with the weather I wasn’t able to get out to do it. Instead, there was some extra relaxation and reading time, which was a welcome change of pace. I couldn’t complain about the beautiful surroundings and amazing guest house, so even with the rain Railei is still one of the highlights of the trip.

After 3 nights (2 days mostly rainy days) in Railei, it was time to move on to my final destination in Thailand: Bangkok. Since I knew I’d be back for work in a few weeks, I decided to go for the full on backpackers experience this time and stayed at a nice new hostel very close to the famed Khao San Road. I had about 1.5 days in Bangkok to explore and take in the scene.

The first evening was spent strolling Khao San, eating delicious spicy green curry, drinking some Chang Beer, and getting a great foot massage, and calling it an early night since I wanted to spend the full next day sightseeing.

My final day in Thailand started early to check out the Grand Palace. I went with a few girls I’d met in the hostel, and we spent several hours exploring (and hiding from the strong sun whenever possible). The palace was beautiful and led to several photo opportunities. After the morning at the palace, we headed out to the Chatuchak Weekend market. This place had everything – if you could dream it, you could find a cheap knock off at this market. It was a great opportunity to get all my Thai souvenir shopping in and have one last fresh fruit smoothie (so readily available from street carts all over – I miss these!). My favorite find was a typical Thai traveler shirt: a grey elephant tank top. I’ve worn it all over Asia since and think it was very worth the 80 Thai Baht (about $2.50) I spent on it. 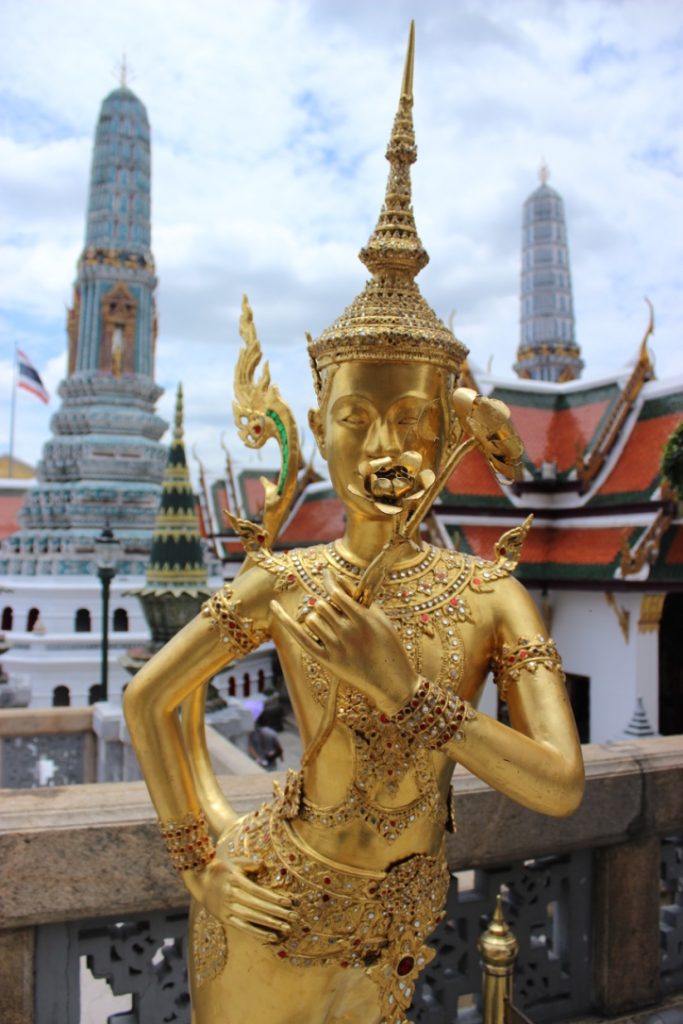 Working on my photography skills at the Grand Palace
My last day ended with an evening at the spa getting a facial, massage, and mani/pedi, all for the equivalent of about $35 USD (3 hours of spa time!). I scored a great selfie stick for 90 Baht, had one last street food Pad Thai (appropriate way to end a trip that started with the same), and Thailand was a wrap! 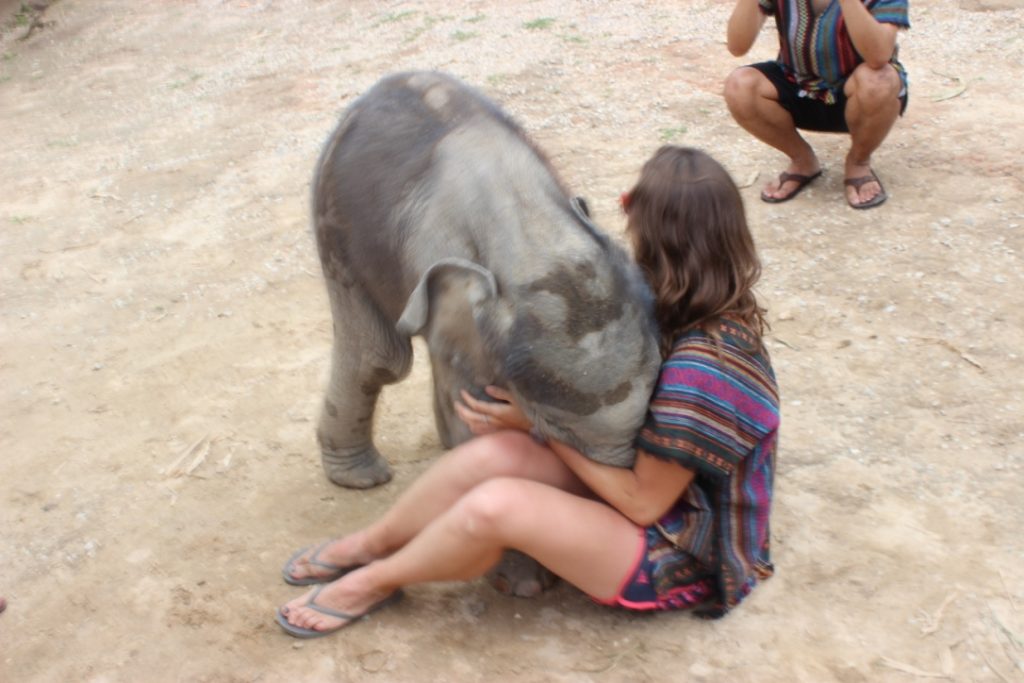 Thailand, you were great. Especially the baby elephant.