This was a return to Vietnam for me. I’d been for ~9 days in December 2014 and visited Ho Chi Mihn City, the Mekong Delta and floating markets of Cai Bai, Phu Quoc Island, Hanoi, and Halong Bay. I knew when I left the last time that I’d be back – there was still so much to see and do and I had loved my time in Vietnam, so of course, when I had an opportunity to take a week off and go travel, I spent another ~9 days (2 weekends and a full week) there soaking up what I’d missed before.

This time though, I was accompanied by my parents. They’d flown over from California to visit me in Singapore for a couple days, and then, per Dad’s request, we went to Vietnam. He’d been stationed at the Phu Bai Army Air Base outside of Danang, Vietnam during the Vietnam War from 1969-70 where he flew OV-1 Mohawks on surveillance missions for the US Army. This would be the first time he’d returned since the war, and I was lucky to experience this with him and my mom.

We flew into Danang, and from the moment we started the approach his eyes were glued to the window, looking for familiar signs of the flight path he knew so well.

We went from Danang to Hoi An where we would stay for 2 nights. Hoi An had been high on my list from reviews I’d heard from other travelers and it did not disappoint. We started the day by renting scooters. My dad hadn’t been on one in ages, but after a quick lesson he was ready to go. My mom hopped on with me and we were off to explore the Old Town. The old town area was extremely cute, we walked around it for a full day after parking our scooters. 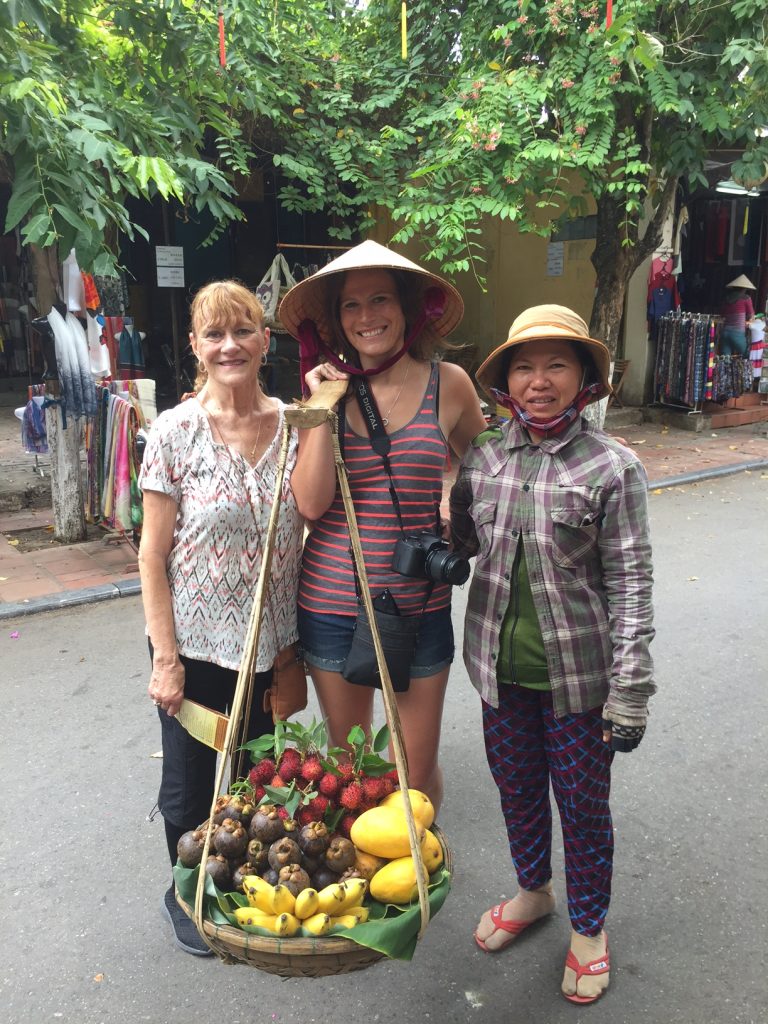 Mom and me in Old Town Hoi An

An important note: The Old Town becomes a walking street only after about 3pm, and scooters are not allowed to be parked on the road after this time. We learned this the hard way… after returning to where we’d left our bikes and finding them missing. After some asks for bribes and a really nice Vietnamese family who spoke good English took pity on us, we found them at the police station and somehow managed to get them back without paying any bribe money! That was certainly an exciting afternoon.

That night we went out to the beach and watched the sunset over Marble Mountain while having mango fruit shakes. My dad flew in an out of the base at Marble Mountain many times while based there, and told us stories over that view of how he’d crash landed a plane on China beach (just down from where we were having our shakes) and other details of his time there. 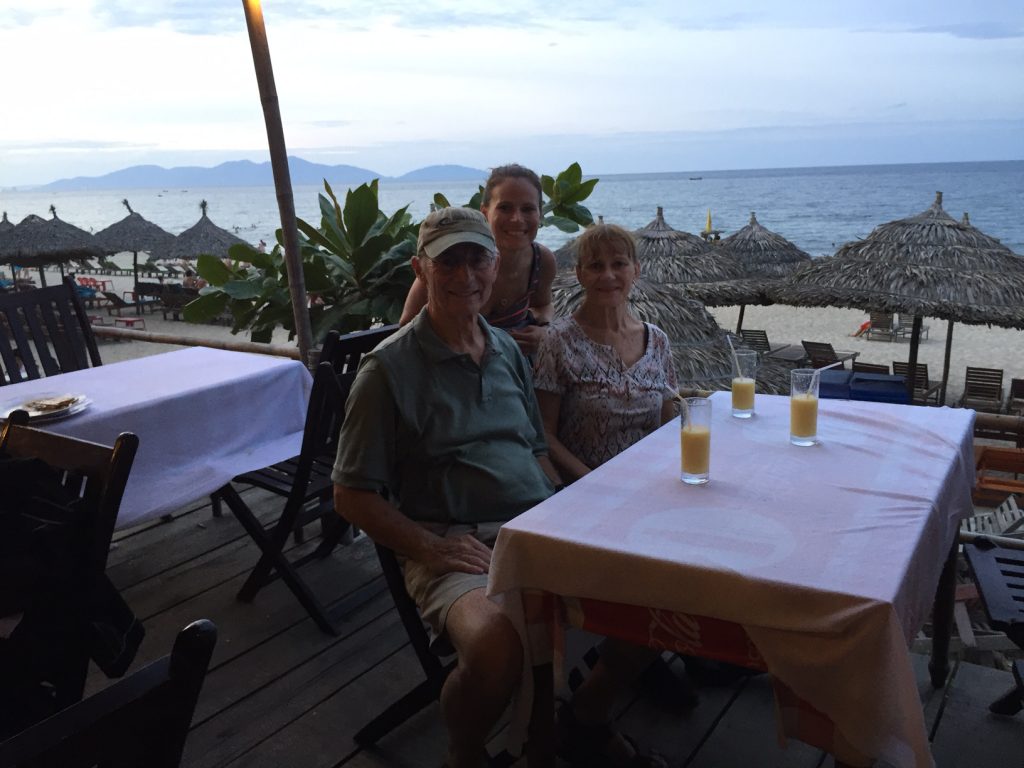 Looking out over Marble Mountain

The next day we took a bus (distance travel buses in Vietnam are quite nice, they are sleepers with lay down beds) for a few hours north to Hue. We toured the Old Citadel in Hue, but the real reason we were there was to head about 30 min out of town to Phu Bai International Airport, formerly the Army Air Base my dad was stationed on. Dad was quite emotional there as he recounted the time he’d spent (~1 year living and flying missions from there) at Phu Bai and even recorded this short video to capture his feelings of being there. 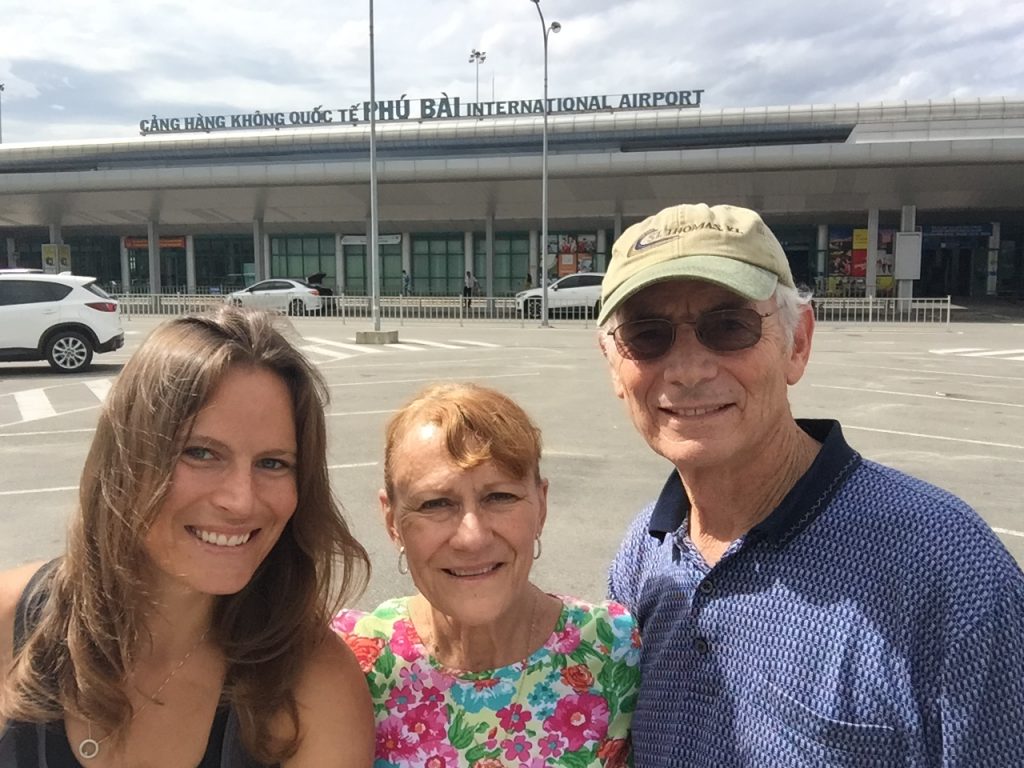 On a brighter note – I introduced my parents to cheap Asian foot massages in Hue, and from then on, they got a foot massage a day (my personal quota for the trip) 😉

Hue is where I parted ways with my parents. They flew up to Hanoi to tour Hanoi, Halong Bay, Siem Reap, and Phnom Phen and I took a bus north to Phong Nha to tour the largest caves in the world.

Phong Nha was awesome. I stayed at Easy Tiger hostel, which for sure was the scene in town. Great hostel, great food, great atmosphere, cool people, good hangout spot, and more like a resort than a hostel, including a beautiful pool and lounge area. From here I toured 4 of the world’s largest caves, all with their own character. Phong Nha cave was cool because we took a boat ride through the whole thing. Dark Cave was a trip because it was a whole adventure package: zipline to the entrance, swim in, walk with headlamps into the dark, climb through tiny cracks to get to a full on mud bath (so cool, the viscosity of the mud is more dense than water, so you float! Quite like the Dead Sea in Israel), and then swim and kayak out. Paradise cave was super impressive in it’s size – 7km long, making it the second largest cave in the world (second only to XXX which was nearby but cost $3k to explore on a 1 week excavation trip). 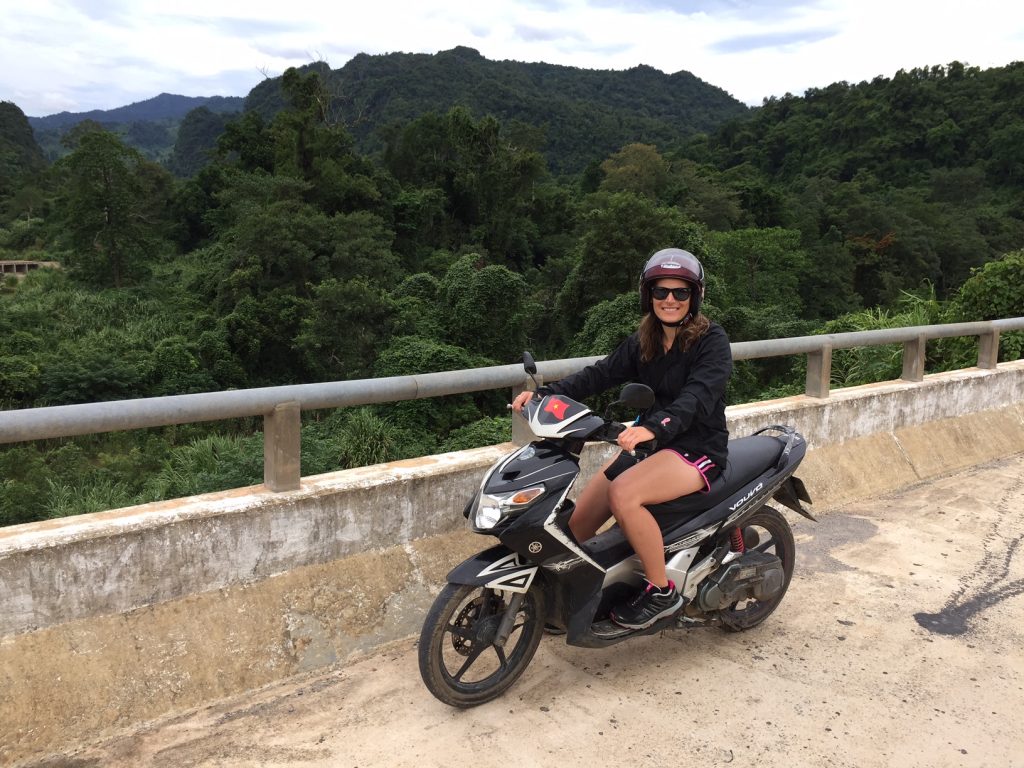 Exploring around Phong Nha by scooter

After 3 days of exploring the caves of Phong Nha and scootering around beautiful, empty roads with luscious green surroundings, I took an overnight bus to Tam Coc to see what is known as the Halong Bay of the inland: beautiful limestone karsts along a little river. You hire a paddle boat and take a 2 hour boat ride through the ‘3 cave river’ (paddling through 3 caves along the way) enjoying the beautiful views. After the river trip and a short hike up a mountain for a great viewpoint, I took another bus the last 3 hours north to Hanoi where I would drop off my bags and then join a group on another overnight bus further north to Sapa for a 2day/1night trek in the rice terraces. 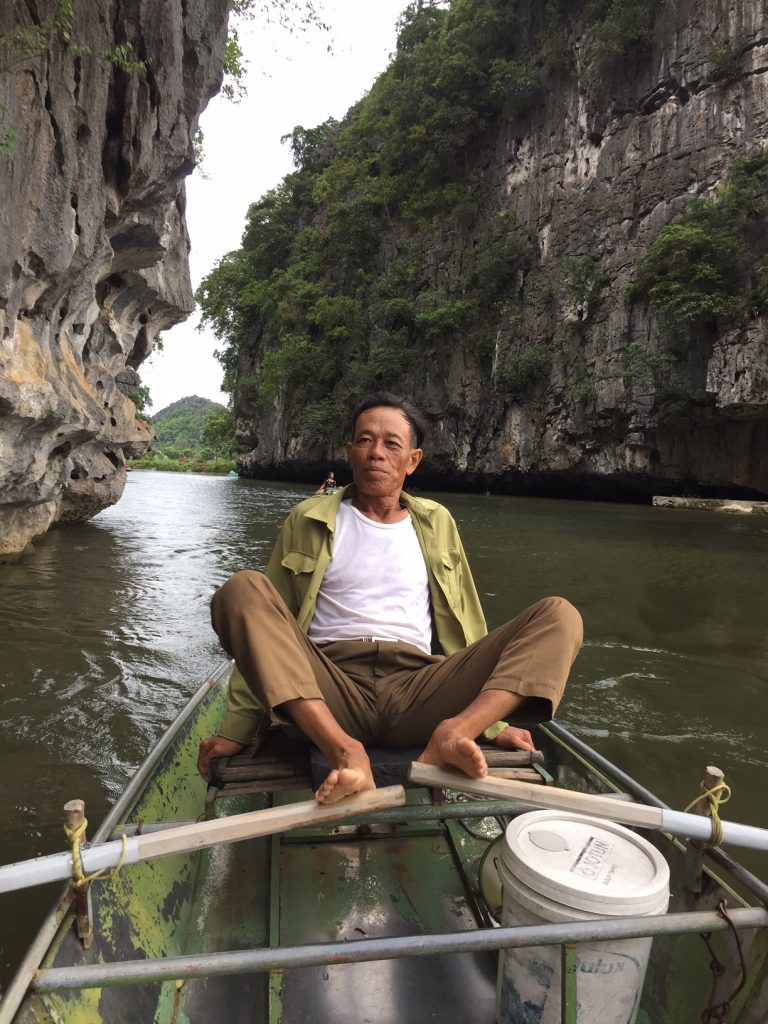 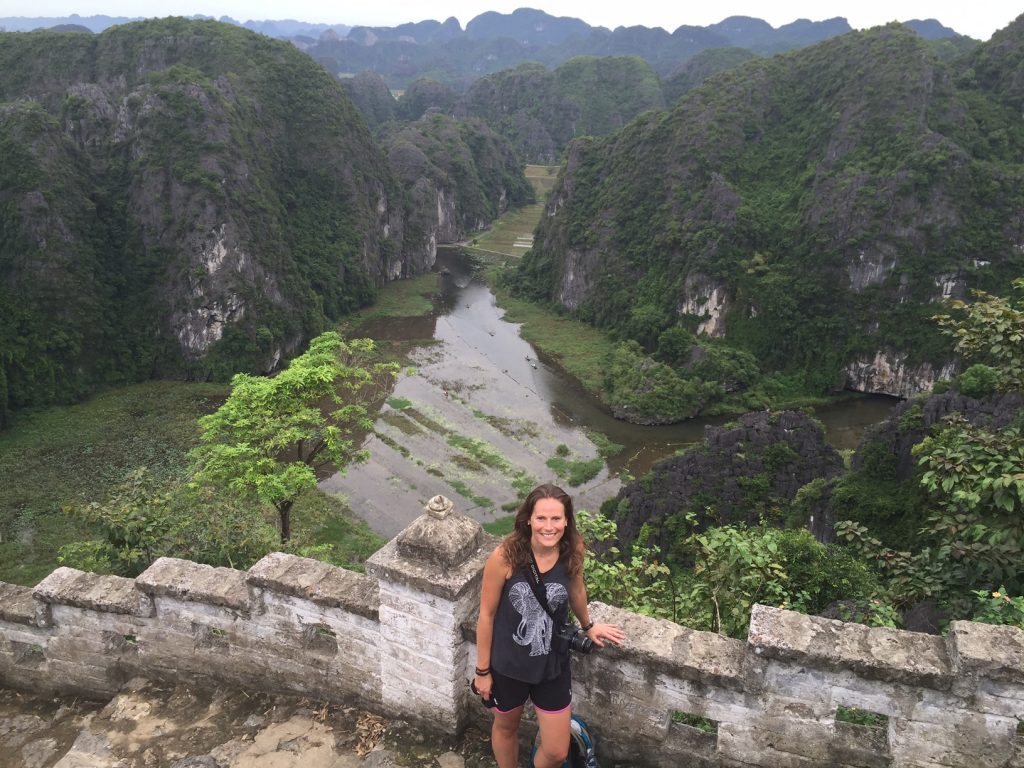 When I got to Sapa, along with the ~100 or so others starting the trek that day, we were put into groups of about 10 and paired with a guide. At breakfast before starting the trek, I ran into the two Canadian girls, Rachel and Taylor, that I’d met a few weeks prior in Laos. We joked how funny and awesome it would be if we were in the same trekking group, and then luckily, we were!

Unfortunately, Typhoon Mirinee decided to hit just as we were heading out to start our Sapa trek… This meant that as we started to hike down through the rice terraces, we were wearing ponchos, carrying umbrellas, hoping our packs stayed dry while we got drenched, and slipping and sliding down the sides of the terraces. This led to two sprained ankles in the group, but thankfully I made it (with the help of my awesome Vietnamese guide – one to each trekker) without incident. 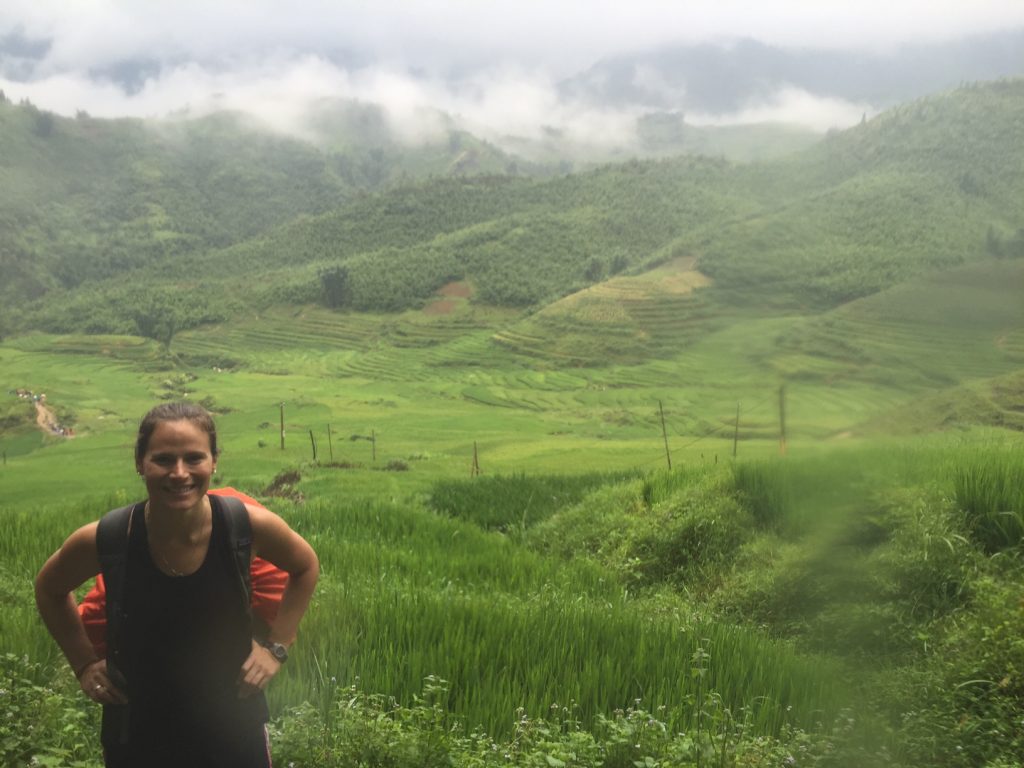 Quick pic during the only ~30 min without rain we had

We stayed the night in a ‘homestay’. I was expecting something similar to what I’d had on my trek in Myanmar, but to our surprise, the homestay had running water, ‘hot showers’ (ok, lukewarm), and wifi! Quite the ‘homestay’. That evening we ate good food, drank rice wine, played cards, and listened to the storm grow more fierce. Eventually the power went out (which meant no more wifi!), and when we woke in the morning, we learned that the typhoon had gotten so bad that they decided to cancel all Sapa treks that day and we had to head back to town via the road because it wasn’t safe. So unsafe, in fact, that sadly a little boy in the next village had been swept away in the storm.

We were told we’d hike out only 15 min or so until a bus could pick us up. Due to a lot of washed out spots on the road though, that pickup ended up being 6km down the road towards Sapa, where we were picked up for the last 3km back to town. All this while it poured. Check out some footage of walking through crazy strong streams cutting across the road. 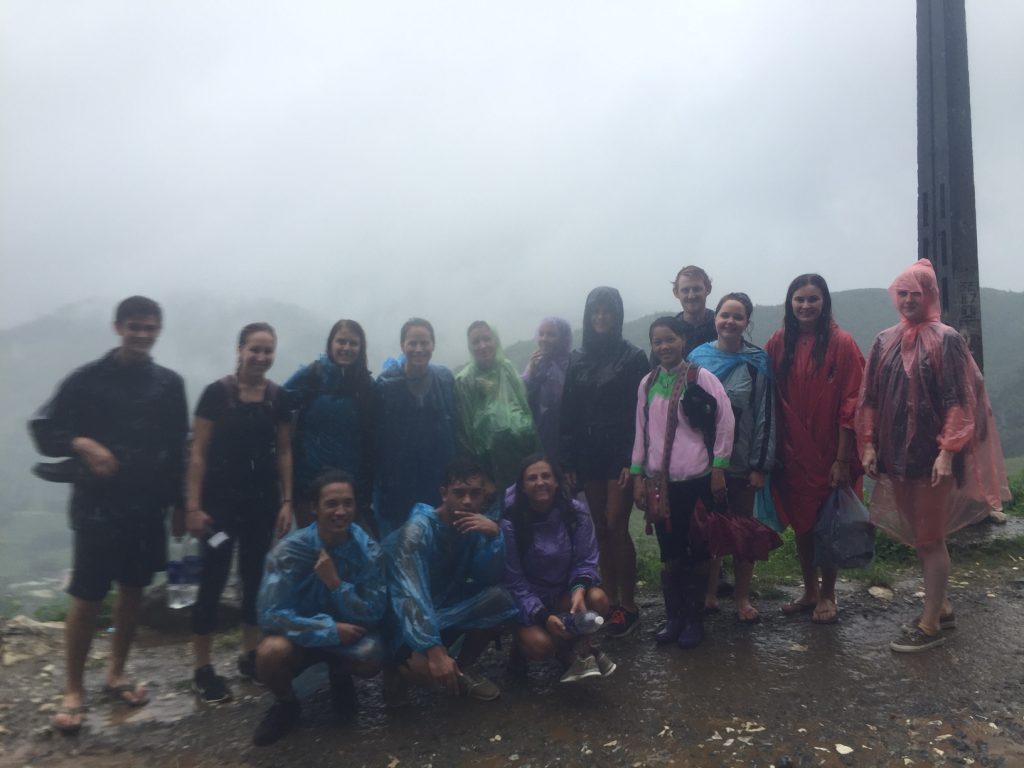 Sapa group shot during the wet trek out

After finishing the trek and changing into some dry clothes, I had just enough time to eat lunch and grab a foot massage before catching the 4pm bus back to Hanoi. It had been quite an adventure in Sapa, but I don’t regret a second of it. Sapa is BEAUTIFUL!

I had one last bowl of vegetarian Pho, stayed overnight in Hanoi, and caught an uber to the airport early the next morning to meet my parents back in Singapore. It was great to be back in Vietnam and explore the areas I’d missed the last time. To date, still one of my favorite countries.

Interestingly though, when chatting with my dad, he obviously had different impressions. Vietnam had changed A LOT since he’d last been there, and being back stirred up some feelings he hadn’t expected. He told me that as the plane took off from Hanoi towards Siem Reap he was finally able to breathe a sigh of relief. He’s glad he returned, but was even more glad to leave again.